Several aspects impact on the survival of a child diagnosed with cancer. When children eventually get to a provincial hospital in KwaZulu Natal the unfortunate financial situation such as the lack of money to access public transport and the lack of proper nutrition is a stark reality.

Our social worker, recently observed once children have been discharged and sent home with their medication to recover,  they return to the hospital for their follow up appointments thinner and more sick. After clinically observing this situation and with some discussion, it became obvious that the children being hospitalised for long periods offered them set meals and proper diets. More often than not they have no food on arrival at home and thereafter it is a scramble for survival, especially if the family has no additional support in  the form of a grant or family members.  Nutritious food  taken with their medication helps the child to recover. After some thought and team discussions CHOC KZN made an appeal for food packs which was costed at R200 per bag and the response from the public was overwhelming. In the last three months we have been able to:

A child  diagnosed with cancer is unbearable without your help. Well done to all the Comrades 2018 Runners, Persistence pays! 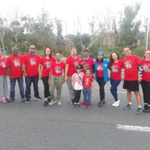